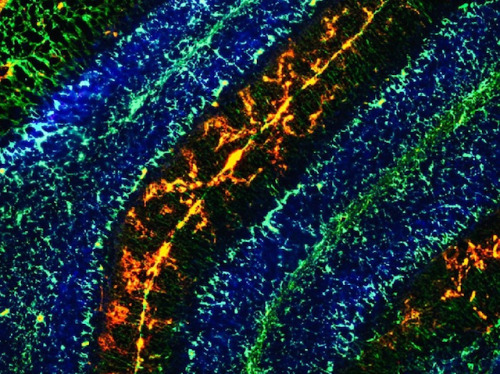 This colourful rainbow is a close-up of a slice through part of a mouse’s brain called the cerebellum. The green streaks are astrocytes – star-shaped cells that form close connections between nerve cells and the blood vessels that supply them with vital oxygen and nutrients (yellow). Importantly, there’s a layer of protection between the blood and the brain known as the blood-brain barrier. This barrier protects vulnerable nerve cells by keeping out infectious bacteria or viruses and preventing harmful chemicals such as drugs or toxins from getting into the brain. Researchers have found low levels of a molecule called TSPO at the blood-brain barrier (highlighted in red), suggesting that it might play an important role in maintaining the barrier. But TSPO is overactive in response to inflammation in the brain (neuroinflammation), suggesting that it could be a useful marker for detecting hidden signs of illness, injury or infection in the brain.

Marijuana use common among adults with medical conditions

15-Month-Old Baby With Delayed Communication and Social Milestones: Can Autism Be Reliably Diagnosed?