The Wasserstein Generative Adversarial Network, or Wasserstein GAN, is an extension to the generative adversarial network that both improves the stability when training the model and provides a loss function that correlates with the quality of generated images.

It is an important extension to the GAN model and requires a conceptual shift away from a discriminator that predicts the probability of a generated image being “real” and toward the idea of a critic model that scores the “realness” of a given image.

In this post, you will discover how to implement Wasserstein loss for Generative Adversarial Networks.

Discover how to develop DCGANs, conditional GANs, Pix2Pix, CycleGANs, and more with Keras in my new GANs book, with 29 step-by-step tutorials and full source code. 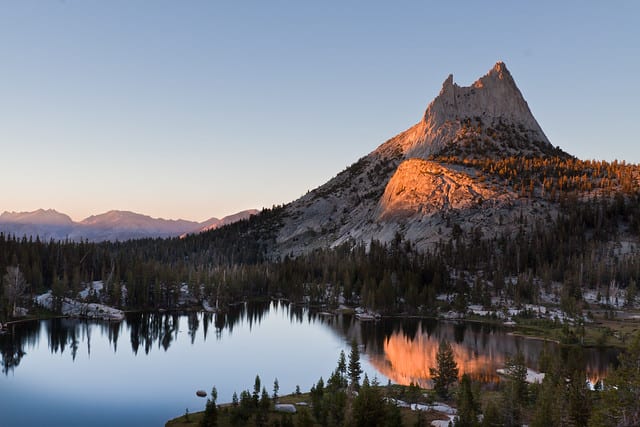 How to Implement Wasserstein Loss for Generative Adversarial Networks
Photo by Brandon Levinger, some rights reserved.

This tutorial is divided into five parts; they are:

GAN Stability and the Discriminator

Generative Adversarial Networks, or GANs, are challenging to train.

The discriminator model must classify a given input image as real (from the dataset) or fake (generated), and the generator model must generate new and plausible images.

The reason GANs are difficult to train is that the architecture involves the simultaneous training of a generator and a discriminator model in a zero-sum game. Stable training requires finding and maintaining an equilibrium between the capabilities of the two models.

The discriminator model is a neural network that learns a binary classification problem, using a sigmoid activation function in the output layer, and is fit using a binary cross entropy loss function. As such, the model predicts a probability that a given input is real (or fake as 1 minus the predicted) as a value between 0 and 1.

The WGAN relaxes the role of the discriminator when training a GAN and proposes the alternative of a critic.

What Is a Wasserstein GAN?

It is an extension of the GAN that seeks an alternate way of training the generator model to better approximate the distribution of data observed in a given training dataset.

Instead of using a discriminator to classify or predict the probability of generated images as being real or fake, the WGAN changes or replaces the discriminator model with a critic that scores the realness or fakeness of a given image.

The most fundamental difference between such distances is their impact on the convergence of sequences of probability distributions.

They demonstrate that a critic neural network can be trained to approximate the Wasserstein distance, and, in turn, used to effectively train a generator model.

… we define a form of GAN called Wasserstein-GAN that minimizes a reasonable and efficient approximation of the EM distance, and we theoretically show that the corresponding optimization problem is sound.

Importantly, the Wasserstein distance has the properties that it is continuous and differentiable and continues to provide a linear gradient, even after the critic is well trained.

This is unlike the discriminator model that, once trained, may fail to provide useful gradient information for updating the generator model.

The discriminator learns very quickly to distinguish between fake and real, and as expected provides no reliable gradient information. The critic, however, can’t saturate, and converges to a linear function that gives remarkably clean gradients everywhere.

The benefit of the WGAN is that the training process is more stable and less sensitive to model architecture and choice of hyperparameter configurations.

… training WGANs does not require maintaining a careful balance in training of the discriminator and the generator, and does not require a careful design of the network architecture either. The mode dropping phenomenon that is typical in GANs is also drastically reduced.

Perhaps most importantly, the loss of the discriminator appears to relate to the quality of images created by the generator.

Specifically, the lower the loss of the critic when evaluating generated images, the higher the expected quality of the generated images. This is important as unlike other GANs that seek stability in terms of finding an equilibrium between two models, the WGAN seeks convergence, lowering generator loss.

To our knowledge, this is the first time in GAN literature that such a property is shown, where the loss of the GAN shows properties of convergence. This property is extremely useful when doing research in adversarial networks as one does not need to stare at the generated samples to figure out failure modes and to gain information on which models are doing better over others.

Want to Develop GANs from Scratch?

Implementation Details of the Wasserstein GAN

Although the theoretical grounding for the WGAN is dense, the implementation of a WGAN requires a few minor changes to the standard deep convolutional GAN, or DCGAN.

Those changes are as follows:

In order to have parameters w lie in a compact space, something simple we can do is clamp the weights to a fixed box (say W = [−0.01, 0.01]l ) after each gradient update.

The image below provides a summary of the main training loop for training a WGAN, taken from the paper. Note the listing of recommended hyperparameters used in the model. 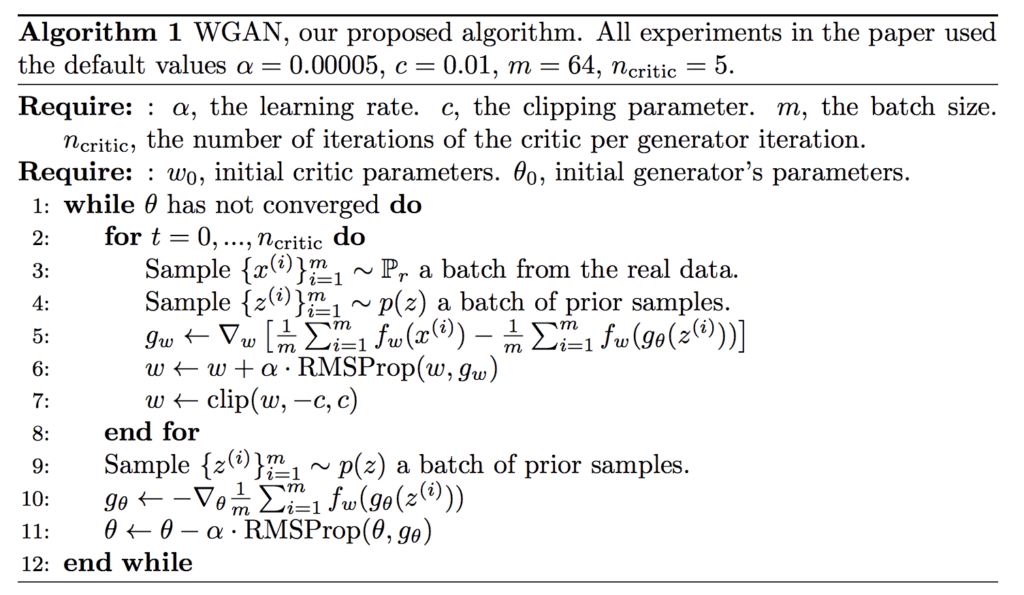 How to Implement Wasserstein Loss

The Wasserstein loss function seeks to increase the gap between the scores for real and generated images.

We can summarize the function as it is described in the paper as follows:

Where the average scores are calculated across a mini-batch of samples.

This is precisely how the loss is implemented for graph-based deep learning frameworks such as PyTorch and TensorFlow.

The calculations are straightforward to interpret once we recall that stochastic gradient descent seeks to minimize loss.

The sign of the loss does not matter in this case, as long as loss for real images is a small number and the loss for fake images is a large number. The Wasserstein loss encourages the critic to separate these numbers.

We can also reverse the situation and encourage the critic to output a large score for real images and a small score for fake images and achieve the same result. Some implementations make this change.

In the Keras deep learning library (and some others), we cannot implement the Wasserstein loss function directly as described in the paper and as implemented in PyTorch and TensorFlow. Instead, we can achieve the same effect without having the calculation of the loss for the critic dependent upon the loss calculated for real and fake images.

A good way to think about this is a negative score for real images and a positive score for fake images, although this negative/positive split of scores learned during training is not required; just larger and smaller is sufficient.

We can multiply the average predicted score by -1 in the case of fake images so that larger averages become smaller averages and the gradient is in the correct direction, i.e. minimizing loss. For example, average scores on fake images of [0.5, 0.8, and 1.0] across three batches of fake images would become [-0.5, -0.8, and -1.0] when calculating weight updates.

No change is needed for the case of real scores, as we want to encourage smaller average scores for real images.

We can implement this in Keras by assigning the expected labels of -1 and 1 for fake and real images respectively. The inverse labels could be used to the same effect, e.g. -1 for real and +1 for fake to encourage small scores for fake images and large scores for real images. Some developers do implement the WGAN in this alternate way, which is just as correct.

The loss function can be implemented by multiplying the expected label for each sample by the predicted score (element wise), then calculating the mean.

The above function is the elegant way to implement the loss function; an alternative, less-elegant implementation that might be more intuitive is as follows:

In Keras, the mean function can be implemented using the Keras backend API to ensure the mean is calculated across samples in the provided tensors; for example:

Now that we know how to implement the Wasserstein loss function in Keras, let’s clarify one common point of misunderstanding.

Recall we are using the expected labels of -1 for fake images and +1 for real images.

A common point of confusion is that a perfect critic model will output -1 for every fake image and +1 for every real image.

Again, recall we are using stochastic gradient descent to find the set of weights in the critic (and generator) models that minimize the loss function.

This is the key point about loss functions used to train neural network models. They encourage a desired model behavior, and they do not have to achieve this by providing the expected outcomes. In this case, we defined our Wasserstein loss function to interpret the average score predicted by the critic model and used labels for the real and fake cases to help with this interpretation.

So what is a good loss for real and fake images under Wasserstein loss?

Wasserstein is not an absolute and comparable loss for comparing across GAN models. Instead, it is relative and depends on your model configuration and dataset. What is important is that it is consistent for a given critic model and convergence of the generator (better loss) does correlate with better generated image quality.

The loss function only encourages a separation between scores for fake and real images as larger and smaller, not necessarily positive and negative.

In this post, you discovered how to implement Wasserstein loss for Generative Adversarial Networks.