The only way to improve things is to get [users]to open up about what’s on their mind. What you get is like an archeological dig where you are sifting and sorting, trying to find the treasures scattered amidst the dirt and rocks. (Brian Too)

I really wish folks would stop referring to the US healthcare “system.” We have a healthcare industry, not a system (unless you’re talking about Medicare or the VA), with competing entities looking for market share. Competitors don’t share information. Also, with the emphasis on reimbursement, preventive care (and pharmaceutical cures vs. treatments) take a back seat. (Kermit) 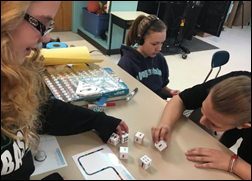 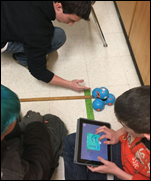 Readers funded the DonorsChoose teacher grant request of Mr. V in rural Maine, who requested programmable robots for his student-driven coding class for grades 6-8. He reports, “The robotics and coding materials that you have allowed us to acquire have opened many new avenues for my students. Students have been able to try their hands at coding, program design, and problem solving. This project has offered students who struggle in other content areas like reading by offering them a chance to view reading in an entirely new light. The simplicity of the coding commands in combination with the ability to see their work in action has proven to be very successful in engaging a broad array of students. These materials have allowed students who have struggled in other aspects of their learning to become leaders.”

Epic tells Wisconsin utility regulators that its expected peak demand usage of electricity will double in the next 10 years, placing the company among the state’s top electricity users that are otherwise mostly manufacturing plants. That’s in addition to its extensive use of solar, wind, and geothermal energy. 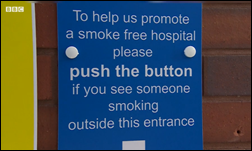 A hospital in England installs wall-mounted buttons near its doors that can be pushed by people who notice someone smoking their despite clearly visible “no smoking” signs. The buttons trigger the playing of a recorded announcement over a loudspeaker, with a child’s voice asking them nicely to stop using terms such as, “Someone’s mummy or daddy could be having their treatment today.” A pro-smoking group (who knew?) calls the system “Orwellian” and says a better idea would be to move the smoking area further away, but not so far that less-mobile smokers can’t reach it easily. That sounds great on paper, but as many of us have observed first hand, is a lot harder than it sounds, especially evenings and nights when patients, visitors, and employees are illuminated only by the glow of their cigarettes as darkness encourages them to choose personal convenience over posted rules. I was interested that the BBC announcement referred to “tannoy,” which is apparently like Kleenex having turned a company name (in this case, a loudspeaker manufacturer) into a common noun.

An Atlanta radiologist who made a fortune from his medical device patents is sentenced to six months in prison for a $2 million tax fraud scheme in which he claimed to be a minister who had taken a vow of poverty. Michael Jon Kell, MD made up a church, named himself as pastor, and placed all his assets in church accounts from which he funded vacations, private school tuition for his kids, online dating services, and ownership of his lavish mansion.

In England, the BBC notes that Member of Parliament Dan Poulter is working 28 hours per week at a side job – in his case, as a doctor taking psychiatric training – than any other member. The article also notes that his voting record is among the lowest of Conservative members.

A shoeshine man who worked from the halls of UPMC Children’s Hospital of Pittsburgh died this week at 76, having donated all of his tips since 1982 – over $200,000 — to the hospital’s Free Care Fund.

In Case You Missed It